I’m going to get right to it … my hubby and I called this an orgasm in our mouths. Yup. He isn’t even a big blue cheese fan. He also said this was the best non-spicy entree he’s ever eaten. For a guy who adds red pepper flakes to EVERYTHING before tasting it, that’s saying A LOT!

I found this Balsamic Marinated Stuffed Flank Steak recipe and then changed it up by using blue cheese instead of provolone, basil instead of spinach and added balsamic caramelized onions from my pizza recipe awhile back.

The most difficult part is butterflying the steak (I have crappy knives, which doesn’t help). Her directions caused me more confusion because I think she got one part wrong in terms of which way to roll (because you want to end up cutting against the grain). But I had also been drinking beer and wine while putting this together, so perhaps it was the alcohol causing the confusion. Whoops! Basically, we ended up with a super long roll, which we cut into two smaller parts. 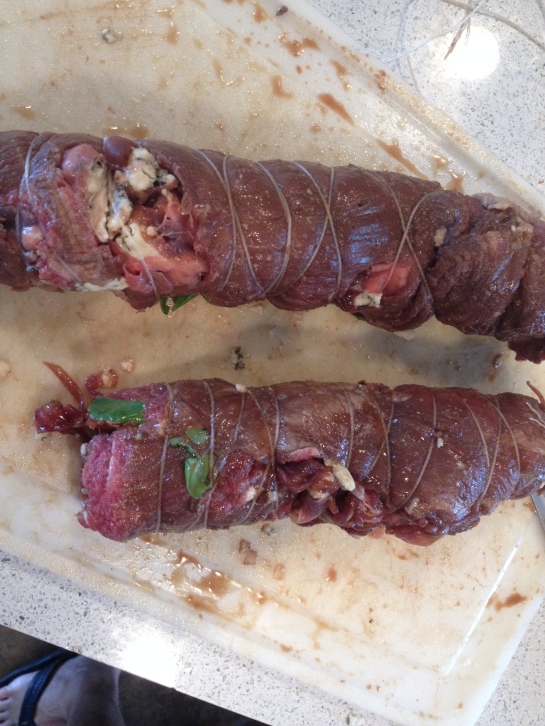 The hubs lent a helping hand in tying it up after rolling it so it turned out purdy (yes, that’s his chancla in the lower left corner). 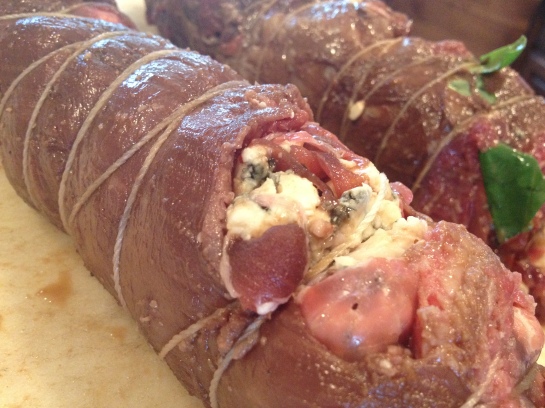 Because this was a last-minute recipe, we only marinated the steak for 5 hours. We usually prefer to do so overnight, but the limited time was fine (it’s all about what’s stuffed in there, anyway). Can’t wait to make this for my family when we stay at a beach house with everyone for a week because I’ll be sure to marinate this for at least 24 hours.

Note: I doubled this and marinated one large flank steak, which we stuffed, and a smaller flank steak we served to the kids — they loved the marinade!

For the stuffing:
3-5 oz. prosciutto
8 oz. blue cheese [I used creamy blue cheese, but blue cheese crumbles would work just as well, if not better, as I think they won’t melt as much]
10-14 large basil leaves
caramelized balsamic onions
salt and fresh ground pepper [I used Himalayan sea salt and my trusty garlic pepper mill]

1. For the marinade, combine balsamic vinegar, Dijon, and garlic in a blender and puree until smooth. With the machine running, slowly pour in the oil until thick and creamy. Season with salt and pepper to taste. I didn’t measure these out exactly (surprise!), and just used my taste buds to guide me (I used more garlic than the original recipe to begin with). Transfer the marinade to a Ziplock bag and add the flank steak (I poked the steak with a fork all over to help get the juices in there). The hubs thinks we should butterfly the steak BEFORE marinating next time — I’ll leave that up to you. Marinate in the fridge at LEAST 4-5 hours up to 24 hours.

2. Mix together your caramelized balsamic onions by following the directions from this post.

3. Remove the flank steak from the marinade and pat dry. You can discard the marinade. When you cut the steak, make sure the long edge runs perpendicular to you. Using a sharp knife and cutting parallel to your work surface, butterfly it in half lengthwise, making sure not to cut all the way through (you want to leave a 1/2- to 1/4-inch portion along the edge). Fold open the steak like you would a book and gently flatten the seam to form a rectangle. Using a meat mallet or rolling pin, pound the steak to a 1/4-inch thickness. I don’t have a meat mallet so I used the tejolete (pestle) from the molcajete (mortar) my mother-in-law brought back from Mexico for me. I put a piece of plastic wrap down before doing so and it worked like a charm. Oh, I just figured out where I went wrong: I read the word parallel twice instead of perpendicular. Oy! It all turned out just fine in the end …

4. Arrange the meat on a cutting board with the grain running east and west. (You want to roll the steak this way so that when it is cut, you slice it perpendicular to the grain.) She said north and south. This was the other time I got confused, because if you rolled it that way, you’d end up cutting with the grain instead of against the grain. Just make sure you end up with the grain running the opposite way you’re going to cut! But I digress … lightly season the top with salt and pepper. Lay the prosciutto slices in an even layer perpendicular to the grain, leaving a one-inch space at the top edge. Next, add the blue cheese.

5. Next, add the caramelized balsamic onions and the basil.

6. Start rolling the flank steak away from you (south to north), making sure to keep it as compact as possible as you roll. I had to go from left to right because it was so long and then the hubs also helped out some to ensure it was as compact as possible. Once rolled, tie it in regular intervals with kitchen twine and season the outside with salt and pepper. I had to cut it into two before doing this because we were dealing with a very long rolled piece of beef. (Also, if you want to prepare ahead of time, this can be refrigerated for up to two days at this point.) No one is perfect, especially me. The hubs helped me tie this baby up, so don’t be afraid to ask for help!

7. Hopefully you already turned your grill on so you can slap this puppy down and get going so you can have a party in your mouth. If not, turn it on. Keep half the burners on high, the other half on low. Sear the steak on all sides on high burners for 8-10 minutes. Transfer steak to low burners and continue to grill for an additional 8-12 minutes. Remove from heat and tent with aluminum foil, letting the steak rest for 10-15 minutes before slicing.

Don’t have a grill? You can cook this in a cast iron skillet in an oven set at 350 degrees F — be sure to sear outside on stovetop for 8-10 minutes on all side and then pop in the oven for 8-10 minutes or until internal temp reads 125 degrees. I’ve never cooked a steak like this, so if you do, let me know how it turns out.

These slices turned out pretty nice: 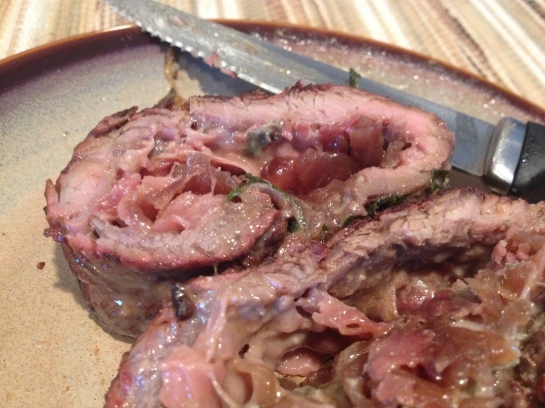 Some of the rest of it fell apart (but still tasted so good when it touched our lips!):

We devoured our plates (and it made for spectacular leftovers!). I really cannot wait to make this again.