We usually do Friday night pizza night with the family. We’re not pizza snobs by any means, so this usually entails walking down to the pier to Cassano’s, a family-friendly (doesn’t matter how loud the kids are or that our little tornado screams “CHOO CHOO,” anytime the train passes by), pizza-by-the-slice-if-you-like joint that serves up one of the best White Pizzas (add basil!) ever. We had a regular waitress (gonna miss ya, Stephanie) who would set lemonades down for the kids and bring out a pitcher of Stella with two chilled pint glasses as soon as we sat down. So the fact that the landlord had a personal issue with the owner and refused to renew the lease, resulting in a local restaurant taking it over, is quite a disappointment. No recipes are being sold, so that means our favorite White Pizza and our coveted available-only-in-March St. Patrick’s Day Pizza (yup, corned beef, sauerkraut and mustard — don’t knock it ’til you try it because it is [was] absolutely amazing and addicting) are no longer. {super sad face here}

I’m not saying we won’t try the new place out once it’s up and running (it isn’t the new business owner’s fault the landlord crapped on the previous owner), but for now, we’re taking the opportunity to try making our own pizza. The girls can add their own toppings and that makes it more entertaining for them (even if they don’t get to search for sea glass and swing on the sand before dinner). The hubs and I can try all sorts of different ingredients, which is always fun.

Making the dough from scratch is a cinch. Bobby Flay (our hero) has a simple recipe my boss has touted, so of course that’s the dough we went with. You end up with two balls. I cut up the second ball into thirds so that each little one has their own pizza and can add whatever their hearts desire (of course little man gets what we say he gets). The first time we did pizza from scratch at home I also made a tomato sauce from scratch. The hubs thought it was overboard, but it was a really easy recipe and didn’t take long. I’m trying to dig that thing up so I can point you to it, but I will have to come back and update because for some reason I totally spaced pinning it to my board. The second time I used jarred Ragu I had on hand. It worked, but it certainly wasn’t nearly as tasty as the scratch sauce. Anyway, I digress …

Last week I mixed up some dough and ended up only making the three small pizzas for the girls and the little man because the hubs worked late and I didn’t feel like eating by myself. That meant the next day I had a ball to work with, so we decided to make an appetizer pizza and I just so happened to have pinned the perfect recipe and had all the topping ingredients, to boot. I don’t know about you, but I am obsessed with the tangy flavor of blue cheese. The hubs isn’t even a fan of it and he called this pizza RIGHTEOUS! My tongue was doing somersaults and cartwheels after eating this sweet and salty goodness — I hope yours does, too!

Ingredients:
3 1/2 to 4 C Bread Flour, plus more for rolling
According to the Chef’s note, cake flour will give you a crisper crust, while regular all-purpose flour — which you can use instead — provides a chewier crust. I’ve used both and couldn’t tell much difference (that could be because I don’t have a pizza stone yet!)
1 t sugar
1 envelope instant dry yeast
2 t kosher salt
1 1/2 C warm water (110 degrees F)
2 T olive oil plus 2 t

Directions:
1. Combine the flour, sugar, yeast and kosher salt in the bowl of a stand mixer and combine.

3. Scrape the dough onto a lightly floured surface and gently knead into a smooth, firm ball.

4. Grease a large bowl with the remaining 2 teaspoons olive oil, add the dough, cover the bowl with plastic wrap and put it in a warm area to let it double in size, about 1 hour.

5. Turn the dough out onto a lightly floured surface and divide it into 2 equal pieces. Cover each with a clean kitchen towel or plastic wrap and let them rest for 10 minutes. After I let them rest is when I divided my second ball into 3 equal mini pizza dough balls. Also, you can let the dough sit overnight as well. I left mine out on the counter and it continued to double in size.

Caramelized Balsamic Onion and Blue Cheese Pizza with Basil
(Adapted from Food52)
Ingredients:
2 T extra-virgin olive oil
3 medium red onions, cut into half moons
1/2 T kosher salt (original recipe called for a full tablespoon of salt, but both the hubs and I felt it was way too much salt)
2 T granulated sugar (more or less to taste — I added this because the onions were super salty, so taste them first before adding and only add a little at a time)
1/2 C balsamic vinegar (original recipe called for 1/4 C but I was distracted by my kids and poured in 1/2 C, which worked out great, you just have to let the onions cook down a bit longer)
7 oz. blue cheese
5-10 basil leaves, torn (original recipe called for thyme)

2. In a large saute pan over medium heat add the olive oil. Once the oil is hot, add the onions and salt.

3. Saute the onions until they begin to color, stirring frequently. Add balsamic vinegar and stir to combine.

4. Turn heat to medium-low and cook for about 30-35 minutes. At about the 15-minute mark add sugar (just 1/2 t at a time, up to 2 T — up to you how sweet/salty you want your onions). Cook until onions are reduced down and caramelized deeply. Remove from heat and set aside.

5. Place one sheet of parchment paper on a pizza peel or the back of a cookie sheet. Add a little olive oil to the parchment and place dough. Using hands, gently stretch dough into a rectangle, about 15 inches by 12 inches. 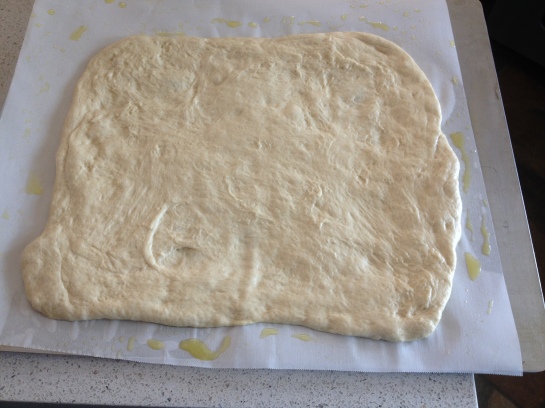 6. Spread caramelized onions evenly over dough. Crumble all but about 1 ounce of blue cheese and sprinkle evenly over onions.

7. Bake for 15 minutes or until the edges are a nice golden brown (I could have probably left mine in a little longer, but I was afraid to overcook/burn it!).

8. Remove from oven and add remaining cheese over pizza, then add your torn basil leaves.

I know you can play around with all sorts of ingredients, but this one was pretty simple and straightforward and I loved that the sauce from the onions served as the base of the pizza. The sweetness of the onions with the saltiness of the blue cheese and the peppery flavor of the basil is a party in your mouth. Like I said, the hubs doesn’t dig blue cheese and he was salivating and elbowing me out of the way to get more.

What are your favorite pizza toppings? Do you have any hints/tricks for your pizza dough?

Next time we want to grill our pizza (we’re just not sure our twerp of a grill will get hot enough!) and I’ll let you know how that goes.